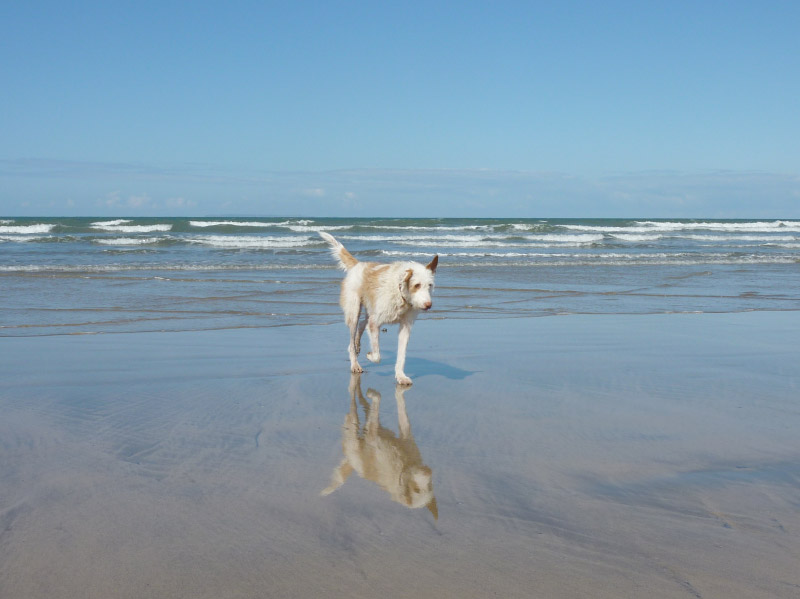 “We first read Barney’s terrible story on the SOS website. He is a Podenco Campanero and had been kept by a hunter, tied up in a dark shelter, rarely fed and left to die. He was rescued by a lovely lady in Sevilla. He had a very bad skin infection, was malnourished and had tick fever. One of his ears was malformed from frequent infections. Thankfully, he was nursed back to health and then his pictures were put onto the website. 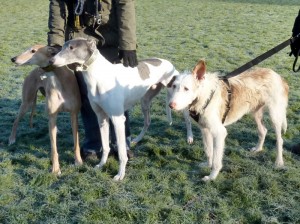 That was when this lovely scruffy hound entered our lives and hearts and we desperately wanted to bring him to our home. He arrived on a very cold night in February 2012. The drivers had brought him to within a few miles of our home, so he only had a short journey with us. We decided to change his name from Chaplin to Barney and we introduced him to our two greyhounds in the garden (it was too cold and dark to go on a walk) and everyone greeted each other very calmly. Barney came into the house and checked it all out and very quickly settled in. We had heard that he was a very nervous dog, but actually he coped much better than the Greyhounds had when they first arrived. He had to go straight to the vet to have an ear infection seen to but he was a complete sweetheart there and all the nurses fell in love with him!

The next day we took him for a walk and it was lovely to see him enjoying all the new smells and sights. He very quickly bonded with me and followed me everywhere. He accepted my husband and teenage daughter very quickly but found my tall, dark 14 year old son very intimidating; it took six months before he was able to trust him. 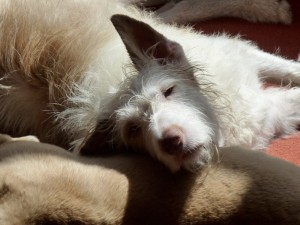 A few days later he needed an operation on his ear because the infection wasn’t clearing up. He had a general anaesthetic which made him feel under the weather for a couple of days but he was quickly back to normal and sleeping through the night. A period of settling in followed. He suffered from some separation anxiety and there was some snapping at the other dogs but within 2 weeks he was sorted and it was as if he had always been with us.
Barney loves his walks. We kept him on a lead for the first month, but started letting him off in safe places for short bursts and quickly realised that he was not going to run away. He always stays close – he enjoys a good run, but his recall is perfect!

All in all, Barney is pretty much the perfect dog. We still have a few little issues; he still cringes when he sees a strange man or we make a sudden move, but time will hopefully sort this. He is a joy. Seeing his pleasure from throwing a toy around the garden or from racing with Molly, one of our Greyhounds, brings a smile to everyone’s face. He loves his food, but he doesn’t steal it and he gets almost as much pleasure from a fresh bowl of water. Everyone who has met him has enjoyed seeing this beautiful boy blossom and now we can’t imagine life without him.”