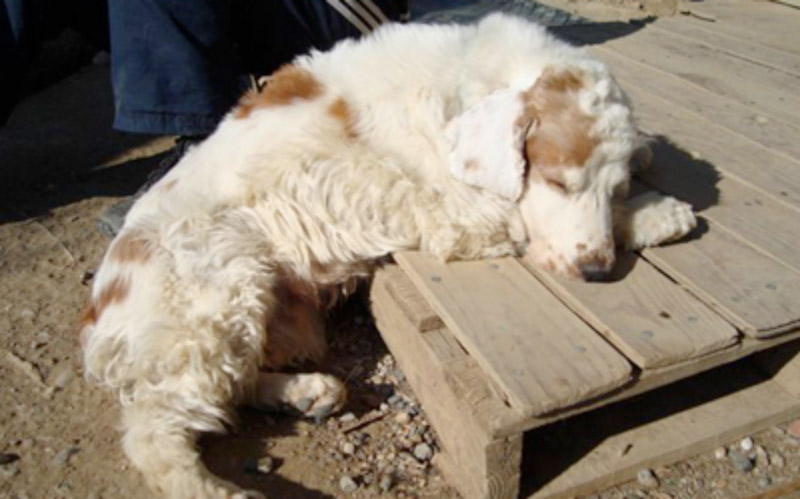 Bobby is a 6 year old Cocker Spaniel and now lives in his forever home with Helen Town.

“Having lost my dog Lia a staff/boxer in November 2010, I was adamant that I would not have any more dogs.
After a few months I found my life very empty and lonely (my husband no longer being around) and missed having the company of a dog. So began my search looking at loads of websites for dogs that needed re-homing. I was very overwhelmed by the extent of strays that needed new homes and was at a loss as to where to even start narrowing down a dog that would be suitable for me until that is when I came across the website for SOS Animals UK.

Having viewed the website for SOS Animals UK I was very moved by the stories of dogs needing adoption or fostering. Even more so I could not believe that so many of the dogs were abandoned by British citizens who had moved out to Spain, set up home, taken on a pet dog only to abandon it the minute they leave to return to England.

The lucky dogs are those already in foster homes waiting to be placed in permanent homes. The rest are being kept in kennels at the shelter in Spain and that is where I saw and fell in love with a dog called Bobby.

SOS Animals UK’s story on Bobby is as follows:
“Bobby is a lovely cuddly, lively boy who enjoys his walks and a fuss being made of him. Sadly he was brought to us by his previous owners who could not care for him any more due to their personal circumstances changing. He is a wonderful dog and it is such a shame he is now living in kennels he would love to be back in a loving home again. He was passed to his previous owners by another family who were leaving Spain so he really does need to find his ‘forever’ home, after he has been through so much in his life already. He is great with other dogs and has always lived with other dogs, but we also feel he will be happy as an only dog getting all the love and attention. He will fit into any loving family, and would love lots of cuddles and long walks.”

As you can guess, I was hooked and applied to adopt Bobby which was accepted. Bobby is adored by everyone and is such a sweet boy who has become my little shadow. He loves nothing more than to play with a football but mostly enjoys jumping into my daughter’s car because then he knows he is off on an adventure somewhere.

Bobby has made lots of new friends but is best buddies with my daughters’ little Westie (Hamish) and Jasmine. All three love to go on long walks together.

Bobby can also be found at most fund raising events.”