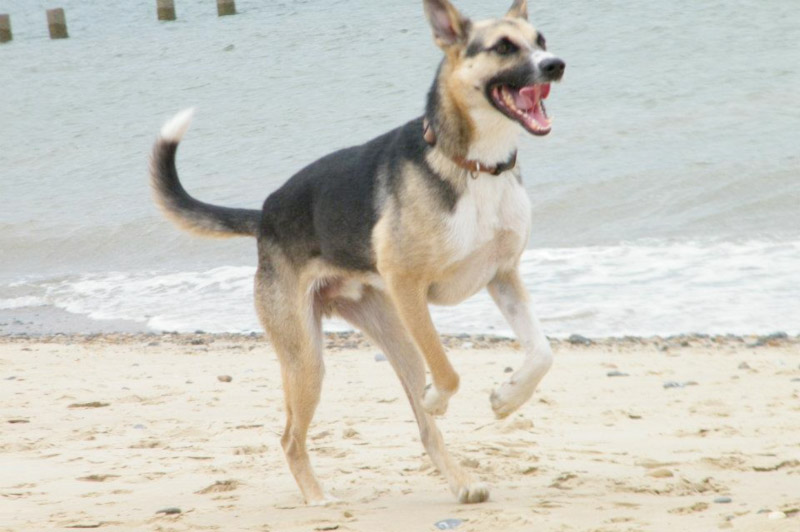 Paddy now lives in his forever home with Juliet Henney.

“The first I knew of ‘Precious Paddy’ was when I saw him in ‘Dogs Needing Homes – New Rescues’ on Dogpages on 1st September 2011. I clicked on the thread, just being nosy, absolutely not looking for a fifth dog, and, as I scrolled down saw these huge bat ears and big brown, oh-so-soulful eyes. Paddy had been found dumped in a cardboard box as a puppy (along with two dead puppies, I have since been told). Well that was it I was in love but the timing was just so wrong as we already had 4 dogs, one of which was (and still is) very old and wobbly. Four dogs is too many; 5 is inching in on crazy Ville so I did nothing about it except kept looking at his link hoping he’d find a home (but also hoping he wouldn’t).

New Year came and went, and I sent a message to the person who’d listed him. His thread hadn’t been updated for some time, so I wondered if he’d found his happy home. No, was the answer and Tania couldn’t understand why. Well that didn’t help me one little bit!

The correspondence between us increased in regularity, all remaining hypothetical on my part. She knew I wanted him, I’d admitted as much but the timing was just so wrong plus we were on opposite sides of the country so, regardless of all the other factors against us, taking my old boy on that sort of road trip just wasn’t an option. 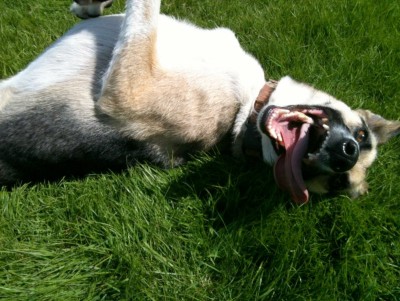 Then Tania happened to mention that her husband was coming over this way on family business and that maybe he could bring Paddy so we could meet him with all the dogs. Well that just felt a little bit too much like fate. How could I possibly say no? I managed to book the day off work and we all piled into the car to head off to meet Paddy. He was bigger than I’d thought he would be and quite distracted by the whole thing, which was understandable. I had hyped up our meeting in my mind to be a real earth-shatterer and it wasn’t, so I was a bit disappointed. All our dogs were incredibly laid back with him (even silly, shrieky Gypsy didn’t say a word) and I did get a kiss, so I figured it was worth further thought.

Being the world’s most indecisive person it did take me a day or two to decide that yes, I would take the trip to Wales to see him again, home check permitting, and bring him home if it felt right. So I did and into the car scrambled a nervous boy, all wide-eyed and hunted looking. Have I ever regretted it? There have been moments when I wondered what I’d been thinking. Would I (could I) ever have taken him back? Not for a second.

He still has nervous moments, he is shy of people, doesn’t like tight gaps (even doorways were things to be shot through with tail between legs when he first arrived) but at home or out and about with family and friends he is just the happiest boy, with the widest smile and so loving.

He was apparently brought over to the UK in October 2009 and I brought him home on May 6 2012, which means he was waiting for over 18 months. Now that’s a long time by any dog’s standards but for one as fine as him? It’s incomprehensible to me why! He is absolutely stunning to look at, fantastic with other dogs/cats and fine with people once he knows them. The only reason I can fathom is that somebody, somewhere had him lined up for one home and one home alone….ours!! I have apologised to him for taking so long.”