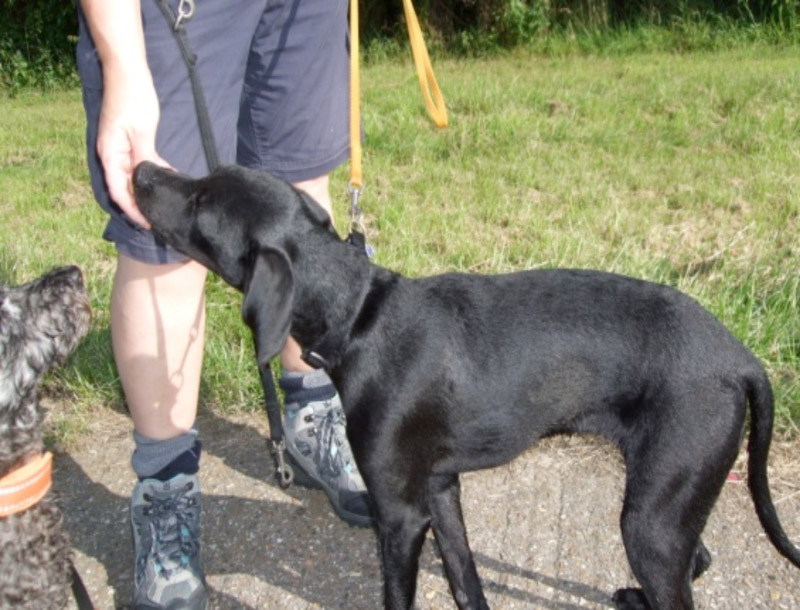 Reba is an English Pointer Cross and now lives in her forever home with Ann Corcoran.

“Reba is approximately 6-7 months old who was dumped along with her mother and brother. We adopted her on the 4th of August 2012 and as you can see she has settled in very well with us.

We have three other dogs, Chip an 8 year old Poodle x Westie (don’t ask!!), Bruce a 4 year old black and tan English Cocker Spaniel and his niece 18 month old Bel, a very beautiful black Cocker who has absolutely no brains (unlike Reba!). We also have three cats one of whom is 15 and had never lived with other animals!

Reba has been fantastic. We are not sure what she is crossed with but by the length of her legs and the speed she can run, whippet comes to mind!! Although she doesn’t yet recall to her name she is learning to come to the whistle. Bruce and Bel, being gundogs, are very responsive to the whistle and Reba is learning from them.

She is very well socialised and we have taken her to a local dog show where needless to say everybody fell in love with her. To her credit she was absolutely brilliant she coped very well with the heat (but being Spanish she should!), lots of people and their assorted dogs, donkeys and a llama!
Now, we cannot imagine not having Reba as part of our pack. In such a short time she has made a massive impact. It is thanks to Tania and her volunteers that we have got such a lovely and much loved addition in our lives.”